Each year, ZTA sisters work year-round in preparation to host the largest Greek philanthropy event on IUPUI's campus. Big Man On Campus (BMOC) is a collegiate all male talent competition where contestants from different campus organizations compete to raise funds for breast cancer awareness and education. With support from the IUPUI Student Community, IUPUI Fraternity & Sorority Life, the IUPUI Campus and the greater Indianapolis community, Lambda Epsilon Chapter has donated over $133,000+ in less than 5 years to end the fight.

Keep up with us on all things BMOC by referring to these links:

Historic. The only word to describe our 2018 Big Man on Campus. After a groundbreaking BMOC in 2017, IUPUI Zeta was set out to make BMOC 2018 one the IUPUI Campus + Indy Community would never forget. 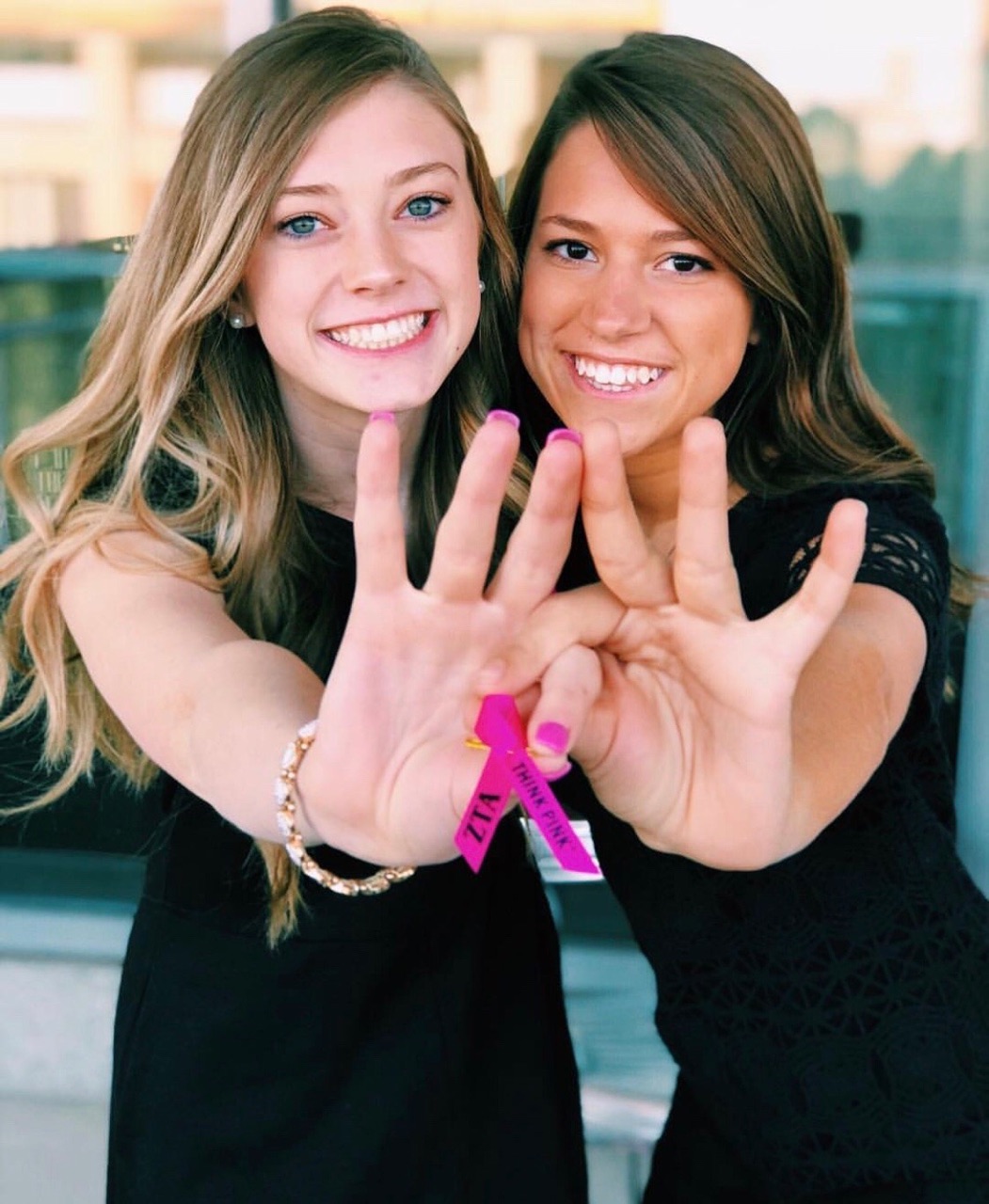 To follow past traditions, BMOC festivities kicked off in the month of October, Breast Cancer Awareness Month, with our 3rd Annual Tackle the Cure flag football tournament, along with 2k in 1 Day. The men of Tau Kappa Epsilon took home the trophy after a competitive bracket between the fraternities and your very own women of ZTA took home the sorority bracket trophy. On our annual 2k in one day, we doubled our goal and raised $4,000 towards our cause. 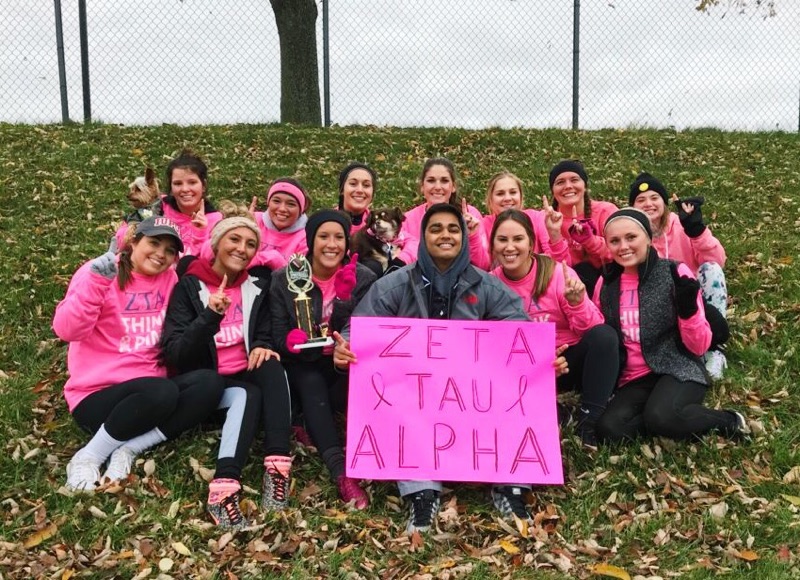 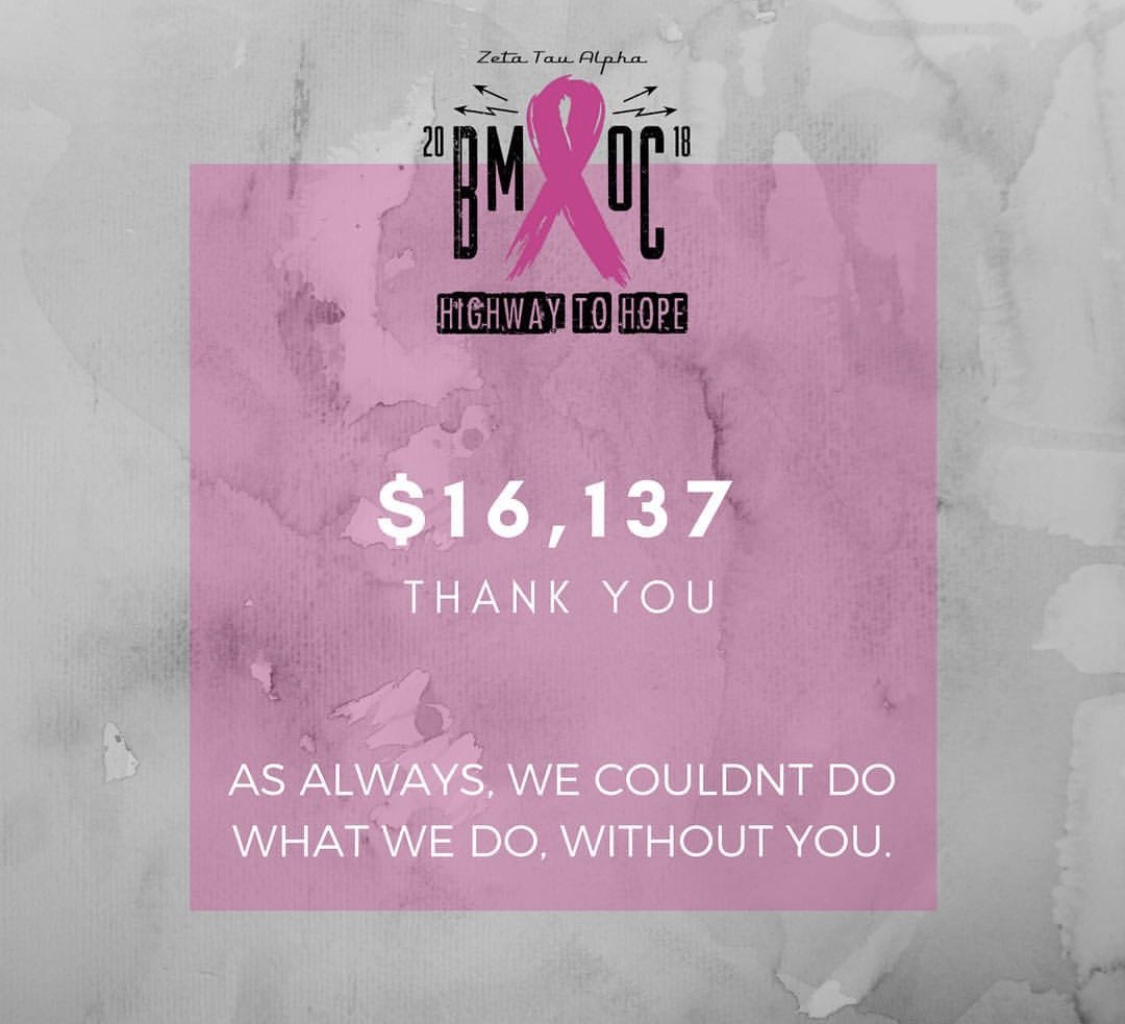 After months of preparation, the month of April finally came and Think Pink Week approached us. We kept with traditions once again and held penny wars and tabling in the Campus Center, but added a corn hole (or bags!) tournament between the fraternities. However, the most competitive and popular pre-BMOC event held on Think Pink Week is our 5k in One Day. We set out to challenge each fraternity, our friends and family, and most importantly ourselves, to raise $5,000 for Breast Cancer Education in Awareness in 24 hours. We not only raised $5,000, we tripled our goal and raised $16k in one day. 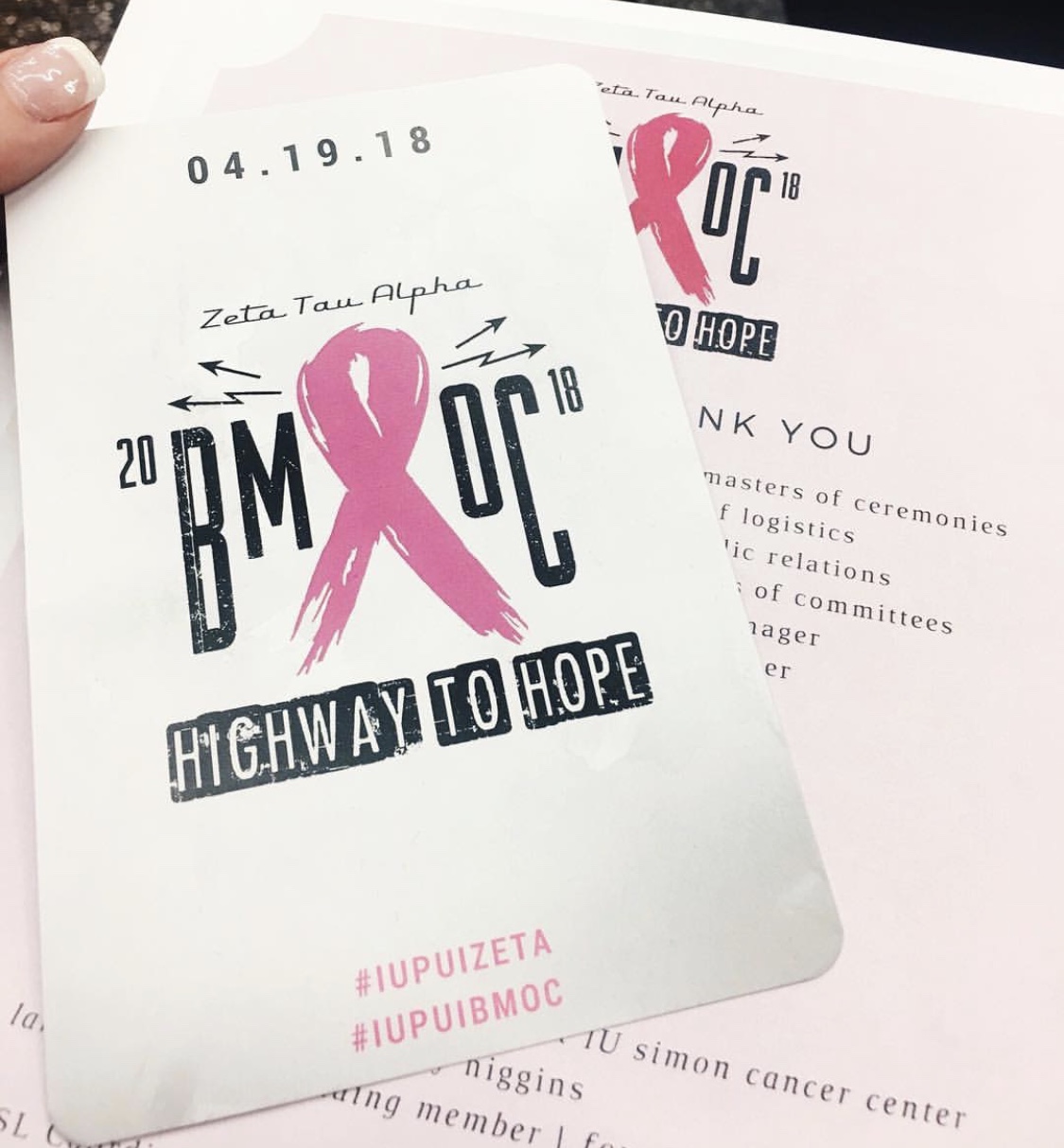 Although the events leading up to BMOC are exciting and groundbreaking, nothing compares to the show and event itself. With our family and friends, breast cancer survivors, our IUPUI Greek Life family, past ZTA Alumnae, and members of the Indy Community in attendance, BMOC 2018 was one of our most attended yet. Our contestants from each fraternity worked beyond expectation to put on an unforgettable show this year. Congrats to Phi Gamma Delta's Andrew Nelson for taking home the crown and becoming Mr. Big Man on Campus 2018. Without each fraternity and their contestant, NONE of this would happen and we are forever grateful for their dedication to our cause. 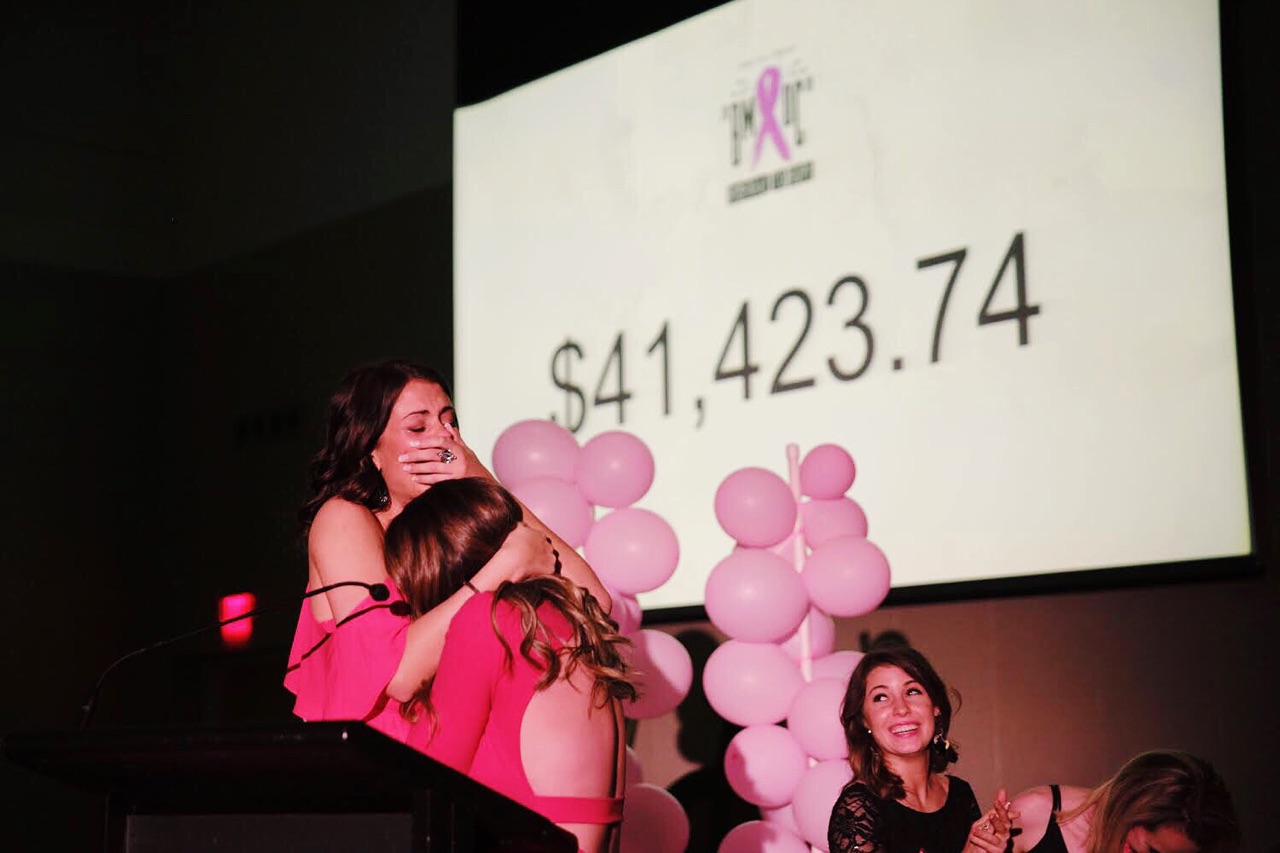 Big Man on Campus 2018 ended with revealing our total, where we raised $41,423.74 for Brest Cancer Education and Awareness. Thank you, 41 thousand times over!

snowtime from Иванов Вячеслав on Vimeo.

2017 was a growing year for Zeta Tau Alpha. Big fundraising numbers were achieved, with a whole new face to the branding. With the help of our creative sisters, and sponsorships this BMOC was one for the books. Traditions carried over for 2017 BMOC with our annal Tackle the Cure Flag Football Tournament, 5K in one day, and Think Pink Week. With huge support from our IUPUI Fraternity & Sorority Life Community, we were able to have another successful Tackle the Cure that is growing in size. The women's bracket along with the men's as we saw this year has become more competitive, but all in high spirits to support a great cause. On April 19, with the help of friends and family and the hard dedication from sisters blasting social media all day, we were able to raise $5,826.43 in one day. These big strides taken, warms our hearts to see how we can influence a community all in hopes to make pink a color again. The best part of BMOC is the show itself. In 2017, we had some amazing talent displayed from each Fraternity in battle for the crown. All of our contestants were awesome to work besides, and made 2017 memorable with each personality that came through. At the show we teamed up with Kendra Scott, and they provided a trunk show in the lobby along with individual gifts for our survivors that were present at the show. We also had a very special guest video from Ben Higgins, Bachelor season 20 star. Congratulations to Andrew Thomas from Delta Sigma Phi for winning the crown for his chapter, scoring them a total of 4 BMOC titles. In 2016, the sisters of ZTA organized the first annual Tackle the Cure Flag Football Tournament. With the amazing support of the IUPUI Fraternity & Sorority Life Community, the event was a major success that helped kick off the month of Big Man on Campus. The week of BMOC is also known as #ZTAThinkPinkWeek and the sisters of ZTA took on a challenge that many though was impossible, raising $5,000 in just 24 hours. With the help of each and every sister, Lambda Epsilon Chapter not only met their goal, they exceeded it. They raised a total of $6,566.80 in just one day.

The Creed of Zeta Tau Alpha asks its members, "to think in terms of all mankind and our service to the world." Following the example set by our founders over 100 years ago, today's members truly live a life of service. On the national and local level, ZTA members at Indiana University Purdue University Indianapolis make a positive impact.